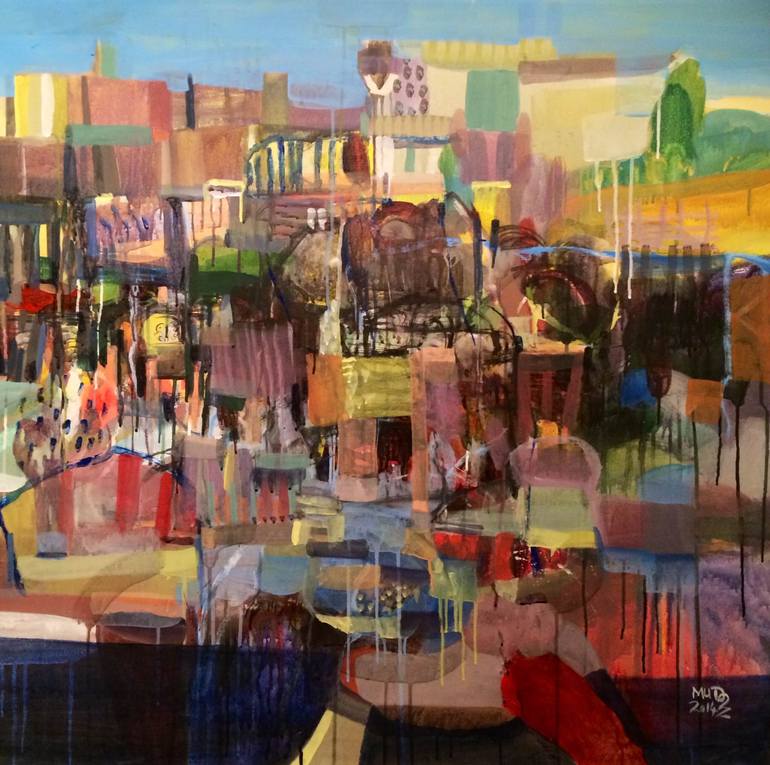 Understanding African Cities; the formal vs. the informal

You don’t have to walk for long in Khartoum city before you start to see contradictions; the old and the new, the big and the small, the ordered and the chaotic, sitting side by side. They coexist and, in some parts, overlap like irregular seams of a colorful and textured tapestry draping the environment around you. Such is the case in most African cities where lines are constantly blurred, and clear definitions are often not so clear; where constructing a road splitting a neighborhood in half can also be seen as a political statement.

Conceptualizing African cites is almost impossible especially when looked at through the lens of western developmentalism; they are either overly romanticizes or seen as lacking in development when compared to metropolitan areas of the global north (Förster, Ammann, 2018). The optimistic/ pessimistic view of African cities dominates most of the African urbanism literature and balanced views seem to be the exception and not the rule. The harmful effect of these contradictory views is that they depict the African city as either a center of artistic expression or as consisting mainly of poverty-stricken slums were corruption and violence are widespread and crisis management is needed. The latter view seems to be the dominant one and has come to represent the whole continent of Africa (Förster, Ammann, 2018).

Although Africa is generally perceived as a ‘rural continent’ (Förster, Ammann, 2018), with an annual urbanization rate of 3.44%, It is estimated that by the year 2030, more African will be living in cities than in rural areas (UN-Habitat, 2016). As such, finding an effective way to study and understand the African city is highly important and will lead to the formation of better urban developmental tools.

An important step is to develop an unbiased view of the African city one that departs from inherited western urban concepts such as the formal/ informal dichotomy (Förster, Ammann, 2018). Instead, it is argued that a better way to look at African urban contexts is to classify them as urban gray- zones that “…only take shape and become colourful through the actors’ agency and practice.” (Förster, Ammann, 2018, p. 3).

…the dichotomy of ‘formal’ vs. ‘informal’ does not play a decisive role outside the narrower administrative context. Most urban actors do not care whether a particular practice is ‘formally’ recognized or not. However, that doesn’t mean that there are no rules or that they are living in a chaotic setting. (p. 11)

It is essential to understand that ‘informal’ doesn’t mean chaotic, and by extension, the openness of the ‘gray- zone’ concept shouldn’t be understood as being unregulated. In fact, evidence shows that people living in what’s considered ‘informal’ settings, tend to self- organize and create strict rules that help shape their communities in the absence of governmental bodies. The relationship between the ‘formal’ and the ‘informal’ within the African urban context could also be seen as one that is interdependent in nature; activities in the formal sector depend on activities in the informal sector and vice- versa (Smit, 2018), making it impossible to draw a clear line between the two (Parnell & Pieterse, 2014).

For governmental and (local/ international) developmental agencies, rethinking how they plan and execute their interventions is important; constructing a road is not merely an act of practical importance, it can also be perceived as a political statement. As Robinson (2013) explains: African cities are ‘sites of assemblages and centrality, territorilaisation and connectedness’ (pp. 1- 28). Consequently, a deep understanding of the history, location, and most importantly the occupants and how they operate is crucial.

African cities present a specific urban mixture, one that is characterized by connections and disconnections providing a fertile ground for new ideas and opportunities (Amin & Thrift, 2002). Thus, it is important that we understand what these cities are before we start to look for what they ought to be. Admittedly, there is a huge theoretical gap that needs to be filled with more research, however, recognizing that successful urban development of African cities depends, to a large extent, on how well we understand them is a major step forward.